Dementia Man will be the second play created and produced by The Actual Dance, LLC.  It is a work in progress and will be showcased at APAP 2023.

Dementia Man is written and performed by Samuel A Simon. It is his second work.  Dramaturg is Gabrielle Maisels.  Sam is a member and co-founder of Solo Arts Heal and collaborates with a platform on The Marsh.

Sam Simon was diagnosed in 2018 with Mild-Cognitive Impairment and in 2021 with Early-Stage Alzheimer's.  He is currently under medical treatment and a participant in a drug trial.  He has brought together his experience with his first play, The Actual Dance, as a vehicle for reaching those going through the disease, a history as a leader in the American Disability Community, and new life experience engaged with dementia to develop what he hopes will be a dramatic statement on the possibility of productive life after such a diagnosis.
​ 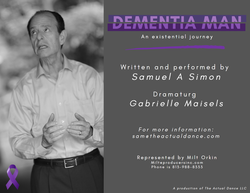 Dementia Man will include Sam, a character known as “The Prompter” – you must have a prompter if you have dementia and various minor characters to help portray the story.   The story is the journey from “knowing you have a problem” to the diagnosis process to coming to terms with the diagnosis.  There is an urgent and severe problem in the United States, if not the globe, in diagnosing and treating individuals and their families.  Sam has been through it, and now has engaged the larger community and associations to realize that his story is typical of others.  It is embodied in: “There is no future for you other than getting worse; make plans for the end of life.”   That is not true, and there many out there working to change this narrative, and I hope to be an artistic voice for that world.

Today, the narrative around dementia is highly damaging.  There are movements afoot to change that, including East Side Institute in Brooklyn, with a program known as “The Joy of Dementia”, and an international movement called “Dementia Friendly,” which seeks to change the narrative and the treatment of people with dementia.   Sam has been part of an advisory Team with the Cleveland Clinic and Lou Rudo Center for Brain Health in Las Vegas to create a resource for newly diagnosed patients and families around America.

His motivation is also to counter a narrative promoted in America that life with Alzheimer’s isn’t worth living.  New books, including Amy Bloom’s, “In Love, a Memory of Love and Grief,” support assisted suicide for those with such a diagnosis.

The goal of Dementia Man is to create of a vision of the value of those who have the disease and a voice for the potential of advancement in medicine when we dare to participate in its cure.

The play is in development and anticipates a first performance or preview at the conference of the Dementia Action Alliance in late 2023. https://daanow.org/ We also anticipate a preview and collaboration with Dementia Friendly Nevada. We have applied for a first full performance at The Washington DC Fringe Festival.

There is a draft ready for preview as a work in progress.