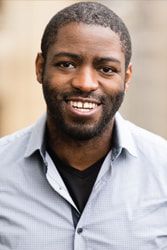 Chuk Obasi began taking on the role of Sam in The Actual Dance in 2016, drawn by the opportunity to re-imagine the telling of Mr. Simon’s story after having previously viewed his performance several times prior.

Obasi is an actor/director, dancer/choreographer, and writer/poet with over twelve years of professional experience nationally and internationally.  He holds a Bachelor of Arts degree from SUNY Geneseo, where he studied communication with a double minor in musical theatre and dance.

Obasi is currently a company member with The Private Theatre, an actor with TEA Creative, a Movement Director at the Stella Adler Studio of Acting, an Adjunct Professor of Musical Theatre at Drew University, and Choreographer for STAR Theatre (Serving Teens through Arts and Research) at the Director’s Company.  He has recently worked with Intersections International (Artist in Residence), the National Dance Institute (Teaching Artist), and Village Playback Theatre (Performer).  Recent works include Let Me Fluff Your Pillow (May 2019, Director); Rocco, Chelsea, Adriana, Sean, Claudia, Gianna, Alex at HERE Arts (2019, starring as Rocco); Twisted Operettas at The Public Theater (2019, Co-Lyricist); The Neighbors at the Italian Theatre Festival (2018, Director); The Actual Dance at the United Solo Festival (2018, performer); Music concert A Drink with Death (2018, Lyricist) at Feinstein’s/54 Below;  Critically acclaimed play Uniform Justice (Playwright/ Director), which he produced at the 2015 NY International Fringe Festival;  Award-winning Feature films “The Depths (2017)” and “79 Parts (2016)” (Actor); A 2018 artist residency with The Marble House Project in Vermont (Actor); A 2016 artist residency at the Actor’s Studio (Actor).  He has also been recently seen performing original spoken word poetry for the Diamond Empowerment Fund 2016 and 2017 Galas in Las Vegas and at The Declaration Initiative 2016 Conference in Washington, DC.  He will serve as Artist-in-Residence for a June 2019 residency at the Caribbean Museum Center for the Arts in St. Croix, US Virgin Islands.

Obasi is a recent recipient of the 2019 Zelda Fichandler Award - a full scholarship to study with the Michael Chekhov Association this Summer in New London, CT.

A New York native, born in Queens and raised in the Bronx, Obasi currently resides in Manhattan with his wife and two sons.   He dedicates his performances of The Actual Dance to the memory of his friend Bobby Kashif Cox, lost to cancer but ever present in spirit.
WATCH A PREVIEW OF THE ACTUAL DANCE with CHUK OBASI