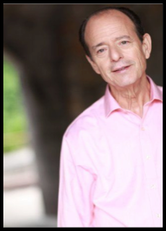 SAMUEL A. SIMON (Playwright/Performer) is the playwright and performer of The Actual Dance.  He also is the Artistic Director of the company that has been formed to produce the show.

Sam describes The Actual Dance work as his “fourth age.”  He comes to it after a career as a prominent member of America’s consumer movement.  Trained as a lawyer, he started his career as one of the original member of Ralph Nader’s very first legal advocacy group in Washington, DC in 1970.  Early in his career his leadership was recognized through a profile in the New York Times. (NY Times, Jan 29, 1971 p. B1).  After a stint in the US Army as a JAG Captain, Sam returned to work for Ralph Nader and then start his own consulting firm.  During that time Sam became a regular in the national news, appearing in program such as Face the Nation,, The Today Show, Good Morning America, CBS Morning News, The Nightly News, Phil Donahue Show, and the Oprah Winfrey Show, among others.

In 2008 Sam began his “third age” following the sale of his consumer affairs firm in Washington and became a Senior Fellow with the then new non-profit, Intersections International, a social justice initiative of the Collegiate Church of New York.   He has transitioned that work at Intersections to serve on its advisory board in 2013 as he began to devote himself full time to The Actual Dance.

Sam returned to theater as an avocation in the late 1990’s.  He is new to play writing. He has been active in community theater in the Northern Virginia/Washington DC area for about 15 years.  He has performed in Temple Rodef Shalom Players group, including roles in plays such as Last Night of Ballyhoo (Adolph), Neil Simon’s “Fools” (Doctor) and roles in annual hour long plays. He has performed with other companies in Washington, DC area including McLean Drama Company and Great Falls Players. He is also trained in improv starting with Sylvia Toone in Washington as a member of the S*T*A*R*S Troupe. He has worked with Artistic New Directions of New York through their acting and improv workshops and has attended ten AND Improv Retreats in the Catskills including three “master retreats”. He has taken Gary Austin, Rachael Hamilton, Scotty Watson and Michael Rock workshops. He was an acting student of Carol Fox Prescott for four years and continues as a student of On the Breath technique with Gabrielle Maisels. The Actual Dance is his first play. 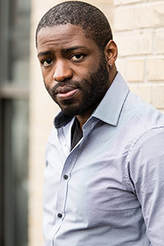 Chuk Obasi began taking on the role of Sam in The Actual Dance in 2016, drawn by the opportunity to re-imagine the telling of Mr. Simon’s story after having previously viewed his performance several times prior.

Obasi is an actor/director, dancer/choreographer, and writer/poet with over twelve years of professional experience nationally and internationally.  He holds a Bachelor of Arts degree from SUNY Geneseo, where he studied communication with a double minor in musical theatre and dance.

Obasi is currently a company member with The Private Theatre, an actor with TEA Creative, a Movement Director at the Stella Adler Studio of Acting, an Adjunct Professor of Musical Theatre at Drew University, and Choreographer for STAR Theatre (Serving Teens through Arts and Research) at the Director’s Company.  He has recently worked with Intersections International (Artist in Residence), the National Dance Institute (Teaching Artist), and Village Playback Theatre (Performer).  Recent works include Let Me Fluff Your Pillow (May 2019, Director); Rocco, Chelsea, Adriana, Sean, Claudia, Gianna, Alex at HERE Arts (2019, starring as Rocco); Twisted Operettas at The Public Theater (2019, Co-Lyricist); The Neighbors at the Italian Theatre Festival (2018, Director); The Actual Dance at the United Solo Festival (2018, performer); Music concert A Drink with Death (2018, Lyricist) at Feinstein’s/54 Below;  Critically acclaimed play Uniform Justice (Playwright/ Director), which he produced at the 2015 NY International Fringe Festival;  Award-winning Feature films “The Depths (2017)” and “79 Parts (2016)” (Actor); A 2018 artist residency with The Marble House Project in Vermont (Actor); A 2016 artist residency at the Actor’s Studio (Actor).  He has also been recently seen performing original spoken word poetry for the Diamond Empowerment Fund 2016 and 2017 Galas in Las Vegas and at The Declaration Initiative 2016 Conference in Washington, DC.  He will serve as Artist-in-Residence for a June 2019 residency at the Caribbean Museum Center for the Arts in St. Croix, US Virgin Islands.

Obasi is a recent recipient of the 2019 Zelda Fichandler Award - a full scholarship to study with the Michael Chekhov Association this Summer in New London, CT.

A New York native, born in Queens and raised in the Bronx, Obasi currently resides in Manhattan with his wife and two sons.   He dedicates his performances of The Actual Dance to the memory of his friend Bobby Kashif Cox, lost to cancer but ever present in spirit.
Kate Holland (Director: 2014-2018 Seasons : Samuel A. Simon) Kate Holland trained in London as an actor and director at the Webber Douglas Academy of Dramatic Art (now part of Central School of Speech and Drama). She has performed in New York, regional theatre, and international arts festivals. Kate has also studied acting with Carol Fox Prescott and directing with Karen Kohlhaas of Atlantic Theatre Company. Directing credits include: Little Wing at the Kraine Theatre as part of a Field Artist Residency, Cloud 9 at the Drayton Theatre in London, Henry VI Part 1 at the Fall Festival of Shakespeare in Lenox, MA, Bongani in the 2011 New York Fringe Festival, June and Nancy in the 2012 New York Fringe Festival, and Clear Cold Place and A Bright Room Called Day, both produced by Vilde Chaye Collective. Kate is currently directing Sam Simon in The Actual Dance and is collaborating on a new play with Caroline Prugh, No Provenance.

Kimani Fowlin (Choreographer/Director for Chuk Obasi 2018) is an internationally recognized dancer, choreographer and educator. Recently awarded the New York State Dance Education Association’s Outstanding Dance Educator Award, Kimani is an assistant professor of dance at Drew University. Work abroad includes performing and teaching in Russia as part of the Fifth International Festival of Movement and Dance on the Volga; performing in Ghana for Panafest; and choreographing and performing in Greece with funk R&B band Milo Z. Kimani is dedicated to creating art with a purpose -- social justice is at the core of her dance making.  Kimani received her MFA from the University of Wisconsin.  She has been on the Mason Gross Dance faculty at Rutgers University for over nineteen years, and teaches dance residencies throughout New York City for Brooklyn Academy of Music and DreamYard Project. As an AFAA Certified Group Fitness Instructor she teaches and organizes events for Crunch in New York City.  She was recently the Dance Consultant for the Cathedral Arts Live Program in Jersey City and served as an advisory member for the Field Leadership Fund (FLF) in NYC.

Eli Zoller (Musical Composer and Music Supervisor.  Musical Director 2014-2017. Guitar) Eli has been music director and orchestrator for numerous musical productions, of multiple styles, in New York and around the country. His years of experience as a professional guitarist, along with his knowledge of various musical styles and backgrounds, has enabled him to enjoy music directing with his guitar as well as from behind the piano. Working with prominent musical theatre composers, such as Peter Mills, Matt Schatz, Caroline Prugh, and the Tony Award winning team of Steven Sater and Duncan Sheik, Eli has had the pleasure of sharing in the production of new musical theatre as well as the classic repertoire that he has enjoyed his entire career.

Mike Rosengarten (Music Director2017 - Guitar) Mike Rosengarten is an accomplished musician and singer.  His primary instrument is the guitar.  He can also cover keys, and even a little cello, violin and accordion! Mike has always had a deep respect for theatre, and regularly plays in pits (and sometimes even on stage!) for musicals.  He has performed in pits ranging from Broadway shows like “Wicked,” to Off-Broadway, to national and international tours and beyond.

Elmo Zapp (Cello) is a talented musician, producer, composer, and musical director.  Recently moved from Los Angeles to New York.
Eric Cooper (Cellist) A native of NYC, Eric Cooper began playing cello at the age of 12. Studying on his own enabled him to create a sound of his own. At the age of 19, he began his studies with Marion Feldman of the Manhattan School of Music. Eric is a very active chamber musician, and co-founder of the Brandy Chamber Society with Pedro Vizzarro Vallajos. Currently Eric is principal cellist of One World Symphony and is also an active member of the String Orchestra of Brooklyn, Brandy String Trio, The Contemporary Music Ensemble of the CUNY Graduate Center, and La Camarata de Washington Heights.