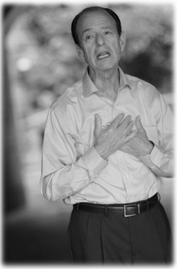 ﻿An award-winning play, The Actual Dance is a graceful and inspiring love story. It is theater that opens a rare window into the mind and soul of a husband and caregiver. Audiences are transfixed as the actor weaves in and out of a mystical ballroom getting ready to do what he could not imagine.

When first noticing his wife at the age of sixteen, Sam could not predict the profound connection they would share—they are two halves of the same whole. In their 33rd year of marriage, that love was tested…and the ringing in Sam’s ear was not as one would expect, in fact it was an orchestra, playing the music of his life--The Actual Dance.﻿

An Official Selection of the 2013 Midtown International Theatre Festival (NYC) and the 2013 Capital Fringe Festival (DC).